1. Yosemite National Park is in California

Yosemite is located in the Sierra Nevada Mountains in California, and it is open 24 hours a day, 7 days a week. You don’t need a reservation to visit the park, although they do recommend reservations if you plan on staying inside the park.

2. It is Home to some of the Tallest Waterfalls

Yosemite Falls, which is located in Yosemite National Park, is the tallest waterfall in North America with a height of 2,425 feet. Sentinel Fall is another tall waterfall found in the national park, and it measures 2,000 feet tall.

In 1864, President Abraham Lincoln wanted to protect the land in Yosemite because of all the visitors rushing to the area during the California Gold Rush. To do this, he signed the Yosemite Land Grant, which would go on to pave the way for the National Park System.

Despite the Yosemite Land Grant occurring in 1864, Yosemite isn’t the oldest national park. That title goes to Yellowstone National Park, which was designated the first national park in 1872 by President Ulysses S. Grant. Yosemite wasn’t made a national park until 1890, and was the third national park to be founded.

5. Twenty-Percent of the Native California Plants are found in Yosemite

California is home to over 7,000 different plant species. And you can find 20-percent of them in Yosemite National Park. This is an ideal location for anyone interested in fauna and flora.

6. Most visits to Yosemite happen from May to October

The most popular time to visit Yosemite is between the months of May and October. In fact, 75-percent of the visits to the park occur during these months.

7. People have been Climbing Yosemite’s Rock Formations for Years

The rock formations at Yosemite have been a popular destination for climbers and hikers since the 1880s. One of the most popular rock formations is known as the Half Dome, which is made from granite. One side of this rock formation is a sheer face with the other sides being smooth and round, which gives the rock the appearance of a dome that has been cut in half.

The Giant Sequoia (Sequoiadendron giganteum) is the largest tree in the world, with an average height of up to 279-feet tall, and it is found throughout Yosemite National Park. The IUCN (International Union for Conservation of Nature) have listed these majestic trees as endangered, stating that there are less than 80,000 of them currently living.

9. Yosemite is Home to the Ahwahnee Hotel

The Ahwahnee, which is Yosemite National Park’s luxurious hotel, was once used as a WWII naval hospital where wounded heroes would be cared for.

10. Yosemite put in a bid to Host the Olympics

11. Yosemite had its First Concession Stand in 1884

12. Yosemite has hundreds of miles of Trails

Yosemite National Park has over 800 miles of trails, which makes it an ideal destination for those who like to walk and hike. You will see a wide array of plants, flowers, and wildlife on the hundreds of trails running throughout Yosemite.

13. Yosemite means “Those Who Kill”

The word Yosemite means “those who kill” in Miwok. The Miwok people are Native Americans who settled in the California region years ago. According to Yosemite National Park, the Miwok people called those living in Yosemite killers because they feared them.

14. Black Bears are in Abundance at Yosemite 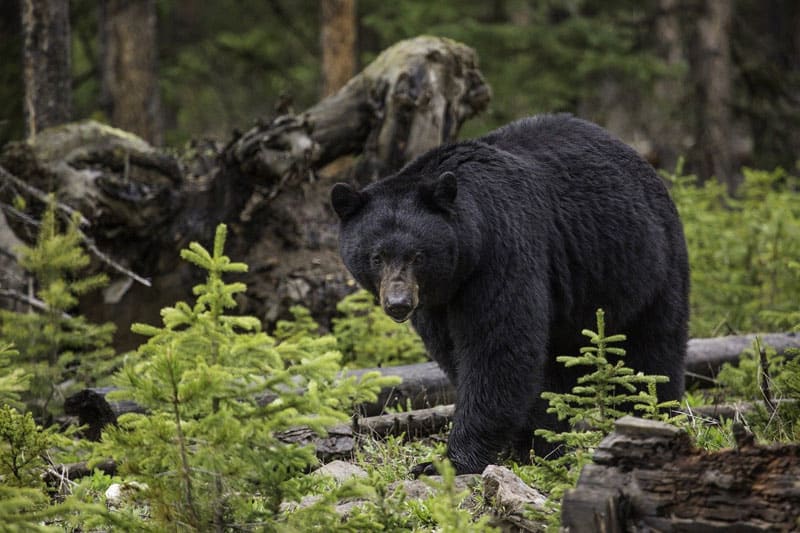 15. You won’t see any Grizzly Bears in Yosemite

Speaking of bears, you won’t see a grizzly bear in Yosemite. This is because, in the 1920s, the last known grizzly was shot and killed outside of Yosemite. So the grizzly bear no longer exists in the state of California.

Trekkies rejoice! You can visit the area where a portion of the movie Star Trek V: The Final Frontier was filmed just by visiting Yosemite. In the movie, Captain Kirk, Mr. Spock and Doctor McCoy can be seen camping and climbing in Yosemite. One of the mountains they climbed was El Capitan.

At sunset, Yosemite’s Half Dome and El Capitan appear to be on fire. This is because the sunlight plays tricks on the rock formations, resulting in fiery glows of orange and red.

18. They used to Push Burning Embers Over the Falls

For many years, hotel operators would push burning embers over the falls at Glacier Point, which would cause the falls to appear as if they were glowing. This event was known as the Yosemite Firefall and was a much-loved sight for visitors. In 1968, however, the director of the National Park Service stopped the practice because it was not a naturally occurring event.

19. You can see a Rainbow at Night

Did you know that Yosemite National Park is one of the few places in the United States where you can see a rainbow at night? Called moonbows or lunar rainbows, they occur at the waterfalls in Yosemite during the spring and early summer months when the moon is full and the night sky is clear. Yosemite National Park measures 747,956 acres, which is about the same size as the state of Rhode Island. And almost 95-percent of this park is classified as wilderness, according to the National Park Foundation.